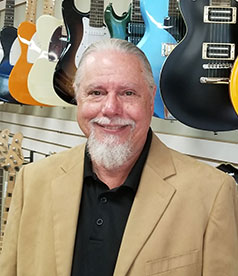 Background: Loves all styles of music. “My Father was big band trumpet man and composer in the
1940’s and a major musical influence. I grew up in a house full of music”

Teaching Approach: Enjoy learning to play guitar while emphasizing the fundamentals of the instrument to establish a strong playing/musical foundation.

Give Us A Call

Send Us A Message